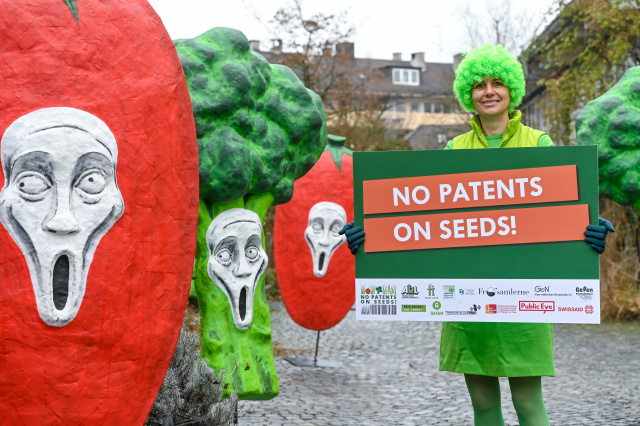 In March a bunch of screaming broccoli and tomatoes in Munich stood outside of the European Patent Office (EPO) to save the future of our food! Our partners and the voices of more than 180,000 people from our community protested to stop companies like Bayer-Monsanto or Carlsberg from having the exclusive right to grow our fruits, vegetables, and seeds. Our voices were heard! The Chairman of the EPO, Josef Kratochvíl, three days after our protest wrote us an official letter saying that he “respects the opinion of civil society groups” and ”welcomes a fruitful dialogue with these groups.” Last year, the EPO officially accepted that conventionally-bred plants are not patentable. But Bayer-Monsanto and others are abusing the European patent system to take control of our food. They want to decide what we eat, what farmers produce, what retailers sell, and how much we all have to pay for it. While the Chairman says that he respects and welcomes our opinion, this just isn’t enough. They must close all legal loopholes in patent law that allow companies to register new patents on tomatoes, barely, melons, and all natural foods. The EPO will meet again at the end of June and its chairman wants a “fruitful” dialogue. We’re currently planning another action prior to this meeting to ensure they’ll get our message: make a final decision to close loopholes and stop patents on seeds once and for all!